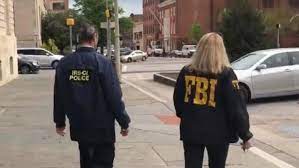 All of a sudden, there’s a knock at the door. No, not a “knock.” There’s a banging at the door – repeated and loud, obnoxious and alarming. Within minutes, your door is broken down and in come the FBI, weapons drawn, clearly meaning business as they begin the process of shaking down your house. This is apparently how things are done now in Colorado, where a homeschool mom who’s been active in local school board meetings and has helped to make some real change was arrested earlier last month. The FBI raided her house on suspicion that she is – wait for it – a domestic terrorist. ► Click HERE to subscribe to BlazeTV! https://get.blazetv.com/chad-prather/ Connect with Chad on Social Media: https://twitter.com/WatchChadhttps://www.instagram.com/watchchad/http://facebook.com/watchchadprather About Chad Prather: Chad Prather is known for his way with words. He is a comedian, armchair philosopher, musician, and observational humorist. Often called “the modern day Will Rogers” and “the voice of the everyman,” Chad brings you his armchair philosophy and observational humor four times a week. Politics, inspiration, comedy, and fun — nothing is off limits on The Chad Prather Show! Some of Prather’s most popular videos are shot in the front seat of his truck as he delivers his fast talking, rabid fire rants. CNN has labeled him the “Pick-up Pundit” and Fox News’ Tucker Carlson has called Prather, “supernaturally articulate.” Prather has mad numerous appearances on Fox News, CNN, A&E, MSN. He is the host of BlazeTV’s “The Chad Prather Show” and “Humor Me with Chad Prather.” His wildly successful 2016 “Kings of Cowtown Comedy: was a hit and his current “Star Spangled Banter Comedy Tour” is selling out theaters all over America. Chad’s guests include: Phil Robertson, Glenn Beck, Jon Miller, Elizabeth Johnston, Jeff Kyle, Jason Piccolo, Matt Kibbe, Sara Gonzales, Mark Maxwell, Mike Stewart, Jennifer Nickerson, David Harris Jr., Mike Ritland, Heath Oakes, Kendall Jones, Rob Redwine, Trey Chapman, Katie Thulin, and many more!